The Sanitation Districts operate and maintain the Joint Outfall System (JOS), the main sewer system that collects and treats the wastewater (sewage) from over 5 million people in the Los Angeles basin. The largest wastewater treatment facility in the JOS, the Joint Water Pollution Control Plant (JWPCP) in Carson, uses two large tunnels to convey water to the ocean. The tunnels are 60 and 80 years old.

A multi-year planning and environmental review effort began in 2006 and identified the need for a new tunnel to ensure the reliability of the JOS and provide sufficient future capacity. A new tunnel will address the following concerns with the existing tunnels:

In 2012, the Sanitation Districts' Board of Directors approved the Clearwater Project Master Facilities Plan, which will protect local waterways by addressing aging infrastructure. A major component of this project is a new 7-mile long tunnel that will be constructed almost entirely underneath public right-of-way (streets). The figure below shows the alignment of the new and existing tunnels. 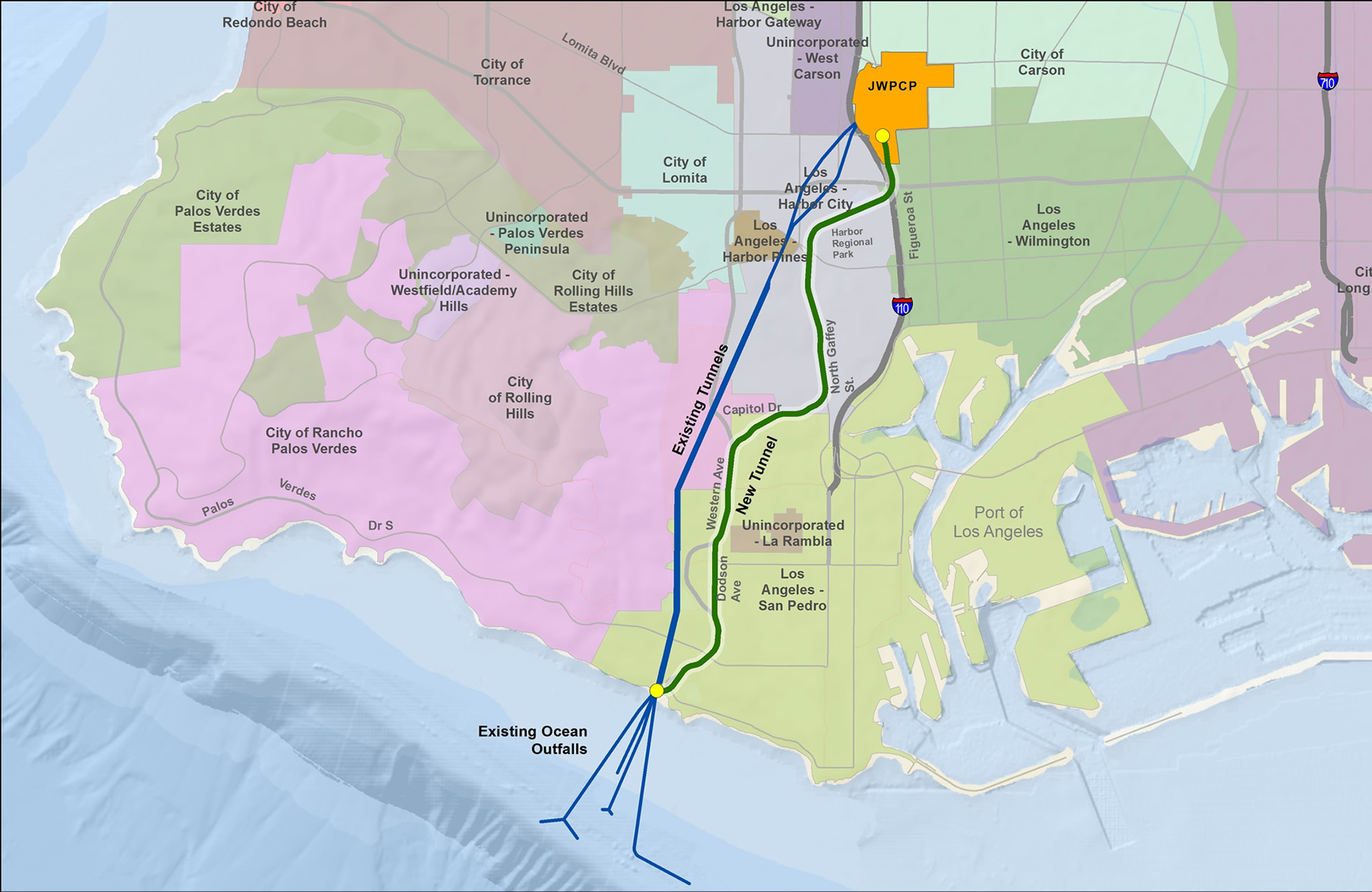 Following Board approval of the Clearwater Project in 2012, the Sanitation Districts hired Parsons Corporation and McMillen Jacobs Associates, engineering firms with tunneling expertise, to assist with the tunnel design. To support the design process, Fugro Consultants Inc., a geotechnical firm, was hired to assist in the evaluation of the geology along the tunnel alignment. Geological data was obtained by taking soil samples (borings) deep below streets and other public right-of-ways. Between 2012 and 2018, the Sanitation Districts focused on designing the new tunnel and obtaining the necessary easements and permits for construction.

Construction for the Clearwater Project will start in 2019 in Carson and finish in 2027 at Royal Palms Beach.

The project will begin at the JWPCP with the construction of an access shaft. This shaft will be used throughout the project as the entry/exit point for construction workers, tunnel materials (e.g., liner segments and excavates soil), and equipment. A noise barrier, approximately 20 feet high, will be erected between the site and nearby sensitive receptors.

At Royal Palms Beach, the new tunnel will connect to the existing ocean outfalls. This work will take a little over two years to complete. All construction work will occur Monday through Friday and will mostly be underground such that, once complete, the site will be returned to pre-construction conditions. Some parking spaces will be temporarily needed during this work. The beach and portions of the parking lot will be accessible at all times.

The Clearwater Project will create local jobs and provide indirect positive impacts on the local economy through the employment of subcontractors, suppliers, and professional services. At least 30 percent of the craft labor will be performed by local residents and veterans.